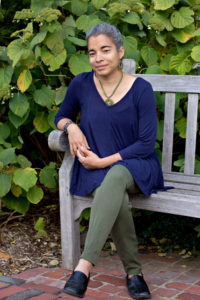 I was introduced to yoga as a tween living in Jamaica through a book my dad bought for my mom. I thought it was fun (I was pretty bendy then) and it felt good. I didn't realize at the time what a gift that was, as yoga became a part of me that never left.

Fast forward years later and during a successful career in corporate information technology (I was a database manager) it occurred to me that I had an on-again, off-again relationship with yoga that didn't make sense - since it was so beneficial when I did it regularly. Studying to be a yoga teacher was a way of forcing myself into a regular practice (since that was a requirement of the training). My training at the Temple of Kriya Yoga solidified my relationship with yoga as a spiritual practice and a philosophy explored through different aspects of human experience, including the body.

Fast forward again to starting graduate school in Counseling after working with computers and data had become unfulfilling. In graduate school I was surprised that many of the psychological theories we were learning were already incorporated into the wisdom of yoga philosophy. In fact, modern psychology was missing the basic understanding that humans live in bodies that are affected by our thoughts and emotions. We aren't just our minds.

Discovering somatic (body-centered) psychotherapy filled that gap and launched a whole new way of being in my own body. Somatic psychotherapy recognizes that the body is an integral part of our life experience (duh - have you ever left home without your body?) In fact, somatic therapists recognize that the body can sometimes get stuck in ways of being that perpetuate stress, anxiety, depression and the effects of trauma.

Our bodies literally form to our life experience. A common phrase in somatic circles is "the issues are in the tissues." Without including the body in the therapy process, we miss out on shifting patterns at this level, and so very often the system eventually just shifts back.

Through my training in Sensorimotor Psychotherapy and Somatic Experiencing (SE), two types of body-centered therapy, I discovered for myself just how dysregulated my own system was due to birth trauma and my own innate sensitivity to the world around me.  Yoga and SE have helped me to become a much calmer, more empowered and more courageous person, and to overcome a pelvic pain condition that was supposedly incurable without drugs or surgery. My training in SE also helped me to more fully incorporate yoga into my therapeutic approach.

It is such an honor and privilege to be able to share these skills and tools with my clients and to introduce other professionals to this way of working.

I'd love to chat with you about how body-centered therapy might help you too...

Join my email list to get more information on professional training, as well as community workshops, classes and therapeutic groups.